James asks the question “What’s causing the fights and quarrels among you”?

One commentator speculated that the context may have been those fights and troublemaking among the Jews that eventually led to rebellion against Roman authority. He then speculates that it was more likely fights among families and Jewish sects. He provides an analysis that James was warning the Christian converts not to become affected by the Jewish culture of that time that was predisposed to strife. Another commentator cites evidence of the Jews in Egypt, Syria and other places the epistle would be read were killing those who were not Jewish because they would not convert to Judaism.

Perhaps a survey of the Greek words used here will help us to understand the context. According to Word Pictures in the New Testament, the Greek words for wars and fightings in the King James or fights and quarrels in the NIV are polemos and mache respectively. Polemos means the chronic state or campaign of a war while mache means the separate conflicts or battles in a war. Strong's Hebrew and Greek Dictionaries tells us the Greek word for members is melos which means a “limb” such as an arm or leg. New Testament Christians are likened to the members of the body collectively; that is, the body itself as the seat of the desires and passions. (See Romans 6:13,19; Romans 7:5,23; and Colossians 3:5)

So putting this all together, we see that the probable context of the “wars” and “fightings” James speaks of are those that were occurring between and amongst the members or Christians of the early church. These Christians were members of one body who were fighting and quarreling among themselves. This was occurring thousands of years ago, but yet it still occurs even today in the Christian church.

Why can’t we stop quarrelling and fighting amongst ourselves? Why does it still continue? Will it ever stop? When?

We can’t stop it because of our sin nature in all of us. Some Christians are better than others at maintaining themselves in their walk with the Lord, but the sad truth is we all struggle with sin throughout our lives. This has been true for all mankind since the fall of man in the Garden of Eden. However, we CAN limit sin against others in our lives when we make decisions that are focused on following the royal rule James mentioned in Chapter Two verse eight of treating others as we wish to be treated instead of fighting and quarreling with them.

Galatians 3:22 NIV
22 But the Scripture declares that the whole world is a prisoner of sin, so that what was promised, being given through faith in Jesus Christ, might be given to those who believe.

The great news that we can rejoice in is that it will definitely stop for all Christians when they join Jesus Christ in the next life. 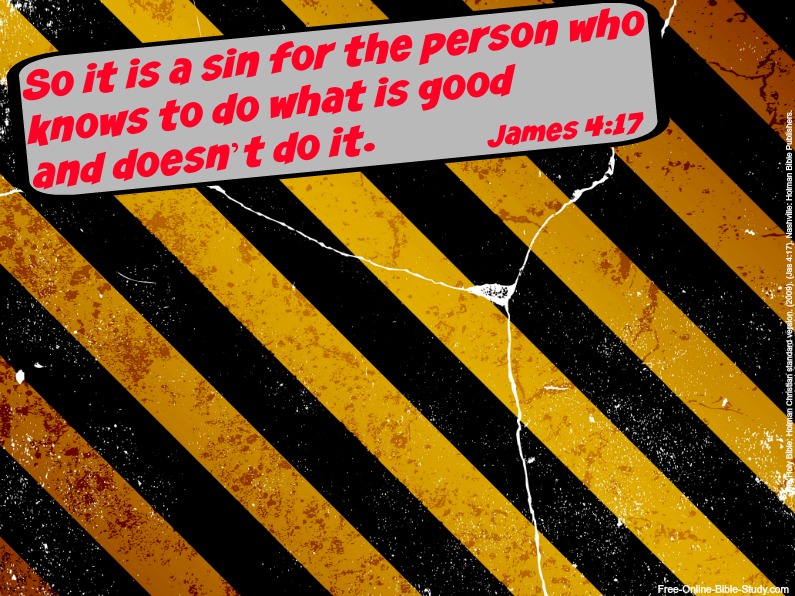 1. How do these ideas already provided in the first three chapters of James help the reader avoid quarreling and fighting?

In verse one the Greek word for lust is hēdonē and means sensual pleasure, and by implication, desire. It is same word used in verse 3, but in verses 2 and 5 a different Greek word is used which denotes an intense craving or coveting for something. This same Greek word occurs in the first chapter of James where we read about lust in verses 14 and 15:

14 But every man is tempted, when he is drawn away of his own lust, and enticed. 15 Then when lust hath conceived, it bringeth forth sin: and sin, when it is finished, bringeth forth death.

What is the result of lusting or lust in the following verses?

The commanding theme of verse 6 through 10 is humility. In verse 6 we are told God gives grace to the humble and in verse 10 we are told to humble ourselves before the Lord and he will lift us up. This humility is called for in this passage of scripture by:

2. How does the theme of lust in James Chapter 4 verses 1 through 5 relate to the theme or main idea of verses 6 through 10?

When we do not humble ourselves to God we are basically giving in to our sinful desire to please ourselves which is lust.

In verse 7 the command is to resist the devil and submit yourselves to God. The result is that he will flee from you.

In verse 8 the command is to draw near to God, wash your hands, and purify your hearts. The result is that God will draw near to you.

The result is that God will lift you up.

1. James tells us not to slander one another in verse 11 and that when we judge our brothers or sisters we are judging the law. He says this is wrong for us to slander and judge one another.

What do the following verses help us understand about this Biblical truth?

2. As Christians are we never to judge actions or behavior of others? Can we judge others and yet not sin? What about the judges in our civil and criminal court systems and Christians on jury duty; do they sin when carrying out these duties?

There is a difference between judging someone in the capacity of civil or criminal court system. The difference is that the person being judged is judged against the code of law. In the context of James, the person is being judged against oneself. It is always pride that causes us to judge ourselves against someone else. We are all sinners and should therefore humble ourselves before the Lord. Yes, of course it's possible to sin in the capacity of judging another in the legal system but the duty in and of itself is not sinful, but judging another's sins is always wrong. That's God's job not ours.

1. What exactly is the evil James speaks of in verses 13 through 16? Why is this evil?

The evil is to assume that you can control your destiny or your future. God is in control. If we are to boast that we are in control and can dictate events, outcomes or circumstances in our lives and not acknowledge the authority and sovereignty of God it is evil and insulting to God.

2. Is James saying in verse 17 that we can sin by not doing something?

Yes, James is saying that if we know to do the right thing and do not do it, it is sin. In the MacArthur Study Bible, a commentary on this verse states that sins of omission lead directly to sins of commission.