According to the Concise Oxford English Dictionary the golden rule is actually a noun and means "a basic rule which should always be followed."  This term was first known as the "golden law" in the sixteenth century.  The term "golden" describes something of inestimable and universal importance.  This saying has became known as the Golden Rule today due to its central role in Christian ethics.

The concept is taken from the Gospels of Matthew and Luke.  It's basically what's stated so simply by the New Living Translation of the Bible: "Do to others as you would like them to do to you."

Similar sayings are found in other religions, most of these parallels phrase the rule negatively.  They're sometimes called the “silver rule” and imply: “Don’t do to others what you don’t want them to do to you.”

Darrell Bock points out a dozen references where he finds parallels to the biblical concept of the Golden Rule as shown below.

Some of these sayings are merely negative or limited in scope.  However, as Strong notes: "Christ lays down a rule for positive action, and that toward all men.  He teaches that I am bound to do to others all that they could rightly desire me to do to them."  The Christian version of the Golden Rule therefore requires an implied action on the part of the doer.

To do unto others what I would desire they do unto me is not a command to become a servant of any evil desires I may have.  To treat others as I myself wish to be treated implies that I know what is best for me and implies a pure intention.

Also, Blomburg observes: "Jesus assumes no pathological deviations in which one would desire to harm oneself, and he presupposes the perspective of disciples who seek what is God’s desire rather than self-aggrandizement."

However, even negative commands imply a command for proper behavior.  If  we aren't causing harm or hurt to others by our sin, we still must follow the rule and sincerely seek one anothers’ well-being.

Who Created the Golden Rule?

Although similar statements exist in other religions, God is the originator of the idea of the golden rule.  Even though some of these extra-biblical references above that are similar to the concept of the Golden Rule are dated prior to the ministry of Jesus, the Old Testament is the original source of the concept.  Specifically, Leviticus 19:18, states:

Moreover, because Jesus Christ is the Word of God in the flesh (John 1:1-14); He, as God, is not only the originator, He's also the perfect example of the Golden Rule being lived out.  He died for your sins even though He was innocent.

Who Taught the Golden Rule?

Certainly the Old Testament teachers taught the golden rule as provided in the levitical law, but the most famous teacher of all time also taught the rule in His most famous sermon.

Jesus Christ taught the Golden Rule in The  Sermon on the Mount.  It's recorded in the Gospels of  Matthew (chapters 5-7) and Luke (chapter 6).

In the Gospel of Matthew, chapter 22, we have the record of a Pharisee and an expert in the Law asking Jesus which command in the law was the greatest.  Jesus answered him in verses 37 and 38:

But then Jesus added the following in verses 39 and 40:

"The second is like it: Love your neighbor as yourself.  All the Law and the Prophets depend on these two commands.”

The Pharisees debated amongst themselves which commandment was the greatest.  They argued for one command being more weighty than another and through the years some Rabbis have even argued that both of the commands above are of equal weight.

Jesus said all the Law and the Prophets depend on (or hang on) these two commands.  To illustrate this point, look at the Ten Commandments found in Exodus chapter 20.

If you analyze them, you will see that the first four commands relate to the greatest command to love God.  The other six relate to loving your neighbor as yourself.

Applying the Rule In Our Lives

As noted above, Jesus restated what was first provided in Leviticus 18:19.  The phrase “As you would have them” doesn't imply “in order that they might,” as some have mistakenly thought.  We don't treat others as we want to be treated to influence them or persuade them to do something for us.  We do it because they Jesus commanded us to do it. 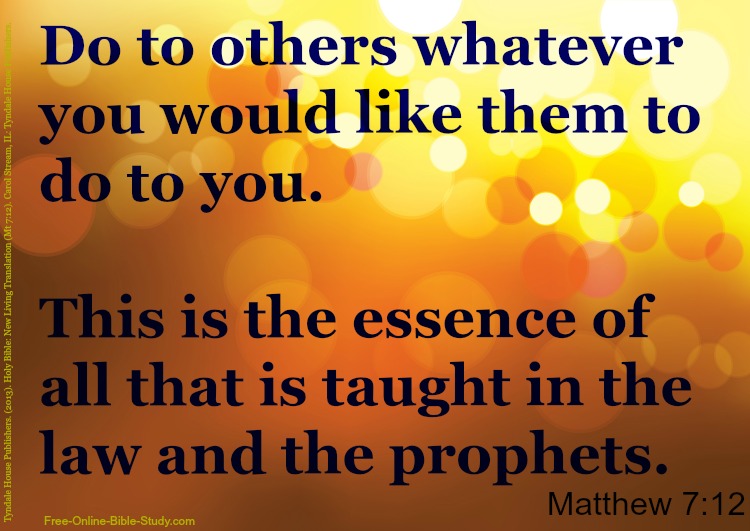 Also, the rule does not impart the idea that because I want things done this way (my way), this is the way I will treat others.  The sensitivity to the feelings and desires of others is the focal point.  Of course, this idea relies on the fact that what is best for man is what God desires for him and not always what man desires for himself.

For example, if someone desires that we treat them abusively because they aren't mentally well and desire to be hurt, then it would not be right for us to comply with their wishes however sincere they might seem to be.  This is because they are not mentally well, but more importantly this is not the will of God that someone be abused.

Our application of the rule implies that we treat others with respect and sensitivity but within the desires of God for people.  This does't mean that we would submit to the desires of a thief, rapist, or murderer - that's obviously not what God wants us to do.

Simply treat others as you wish to be treated.  It will make our world a better place won't it?

As the New Living Translation of Romans 13:9-10 says: "Love your neighbor as yourself.  Love does no wrong to others, so love fulfills the requirements of God’s law."