Welcome to the second of five studies of the Book of James on James Chapter 2. Please allow the reading of the three stories below.

Many years ago, a man came into my church and he was obviously a poor and destitute man. He was unkempt, his clothes were dirty, and he was scruffy looking with tangled, uncombed hair and an unshaven, scraggly beard. His hands were dirty, he smelled bad, and apparently everything he owned was on his back. Our pastor took him and welcomed him into our church with loving kindness. I must admit, at the time I did not know what to do and was uncomfortable. Some simply stared while a few whispered.

In another church on a Sunday morning back in the 1960’s, there was an elderly deacon at the rear of the church greeting folks as they arrived. It was very crowded that day and the deacon noticed that there were very few seats left. He was just about to go to his own seat and join the service when a young man entered the church. He was unlike anybody that had arrived that day. He had long flowing hair, wore beads around his neck, sandals without socks, and dirty jeans with patches and holes.

While looking around to find him a seat, the deacon was surprised when the young man simply walked down the aisle and sat on the floor cross-legged squarely in front of the altar. The deacon soon followed him down the aisle. The congregation thought he would ask him to take a seat or perhaps show him to a seat. However, all were amazed when the elderly man sat, with some degree of difficulty, on the floor right next to him.

In another church a man I would describe as “down and out” or destitute, similar to the man in the above story entered the church. Nobody greeted him when he entered. He sat down in the middle of the church where all could see him, and when he did, others near him moved away to other seats. No one offered him anything but curious or distrustful looks. Many wondered where the pastor was and why he did not confront the man and ask him to “clean himself up” before he entered the church.

However, all were amazed when this man began walking to the front of the church. He reached the front pew and all wondered where he was going, several deacons began moving forward hurriedly when he started to ascend the podium. When he reached the pulpit and removed his wig and false beard the congregation let out a collective gasp as they recognized their pastor. He began his sermon in the Book of James, Chapter 2, verse 1.

That is where this Bible study begins as well.

1. What is it about man that makes us uncomfortable with situations such as this?  Why do we show partiality based on outward appearances?  Why do we make assumptions and judge people by what we see?  Read Luke 18:10-14.

Does the story Jesus tells in this scripture provide an idea or clue as to the reason that we might not treat others the same?  What is it?

2. Do you wear your best available clothing for church services?  Do you pay more attention to what you wear to church compared to other events?  Why or why not?

1. For the following verses from James Chapter 2, what are the arguments James provides for not showing partiality:

2. In James Chapter 2 the author reminds his readers (who were typically poor) that the rich are exploiting them, dragging them to court, and slandering the noble name of Jesus Christ.  Is James encouraging his poor brethren to disrespect the rich members of the assembly?  Why or why not?

2. Was there ever a time in your life where you were loved by someone that would demonstrate the idea of “love your neighbor as yourself”?

How can we love your neighbors as ourselves? (Remember as Jesus pointed out in Luke 10 that our neighbor is anyone who needs our help.) 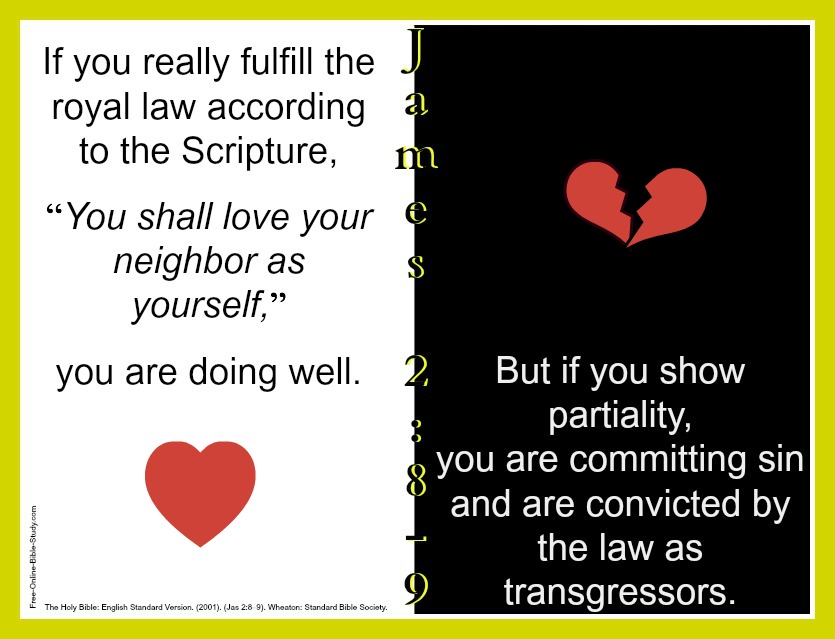 2. Considering the main point, if you were to choose the main verse or phrase of James Chapter 2 verses 14 through 26, what would it be?

1. What did Jesus Christ teach us about the concept of faith and works?  Please cite a Scriptural example.

2. Besides Abraham and Rahab, who from Scripture best illustrates this concept of faith with works, i.e. works in the sense of good deeds?  How or why did you choose this person’s life as your citation?

Does James' statement in James Chapter 2 verse 18 that one can demonstrate his faith by his works contradict Paul’s statement in Romans 3:28 that a man is justified by faith without the deeds of the law?

Click Here to Compare Your Answers for James Chapter 2