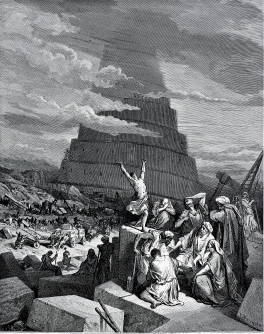 This study of Genesis Chapter 11 is the final Bible study in a series of 11 studies of the first 11 chapters of the Book of Genesis.

Here we see another era begin with the introduction of Abram, later called Abraham.

We also learn why God confounded the languages of the entire world and scattered mankind around the face of the earth.

Have you ever wondered why there are so many different languages in the world?  When you Study Genesis Chapter 11 you find the answer.

1. Fill in the ages of the line of Shem on the chart in the space provided for each name.

Click here to download a worksheet (PDF file) to analyze the lineage of Shem from Genesis Chapter 11.

The numbers across the top and bottom of the chart represent the years since the creation of Adam. The grey boxes represent birth years and the  black boxes represent a death years. They do NOT represent time in equal increments horizontally.  Therefore, they cannot be compared for length of years by comparing the length of the lines to one another. What they DO represent is who was alive when others were alive at the same time.

Once you see the worksheet, print it out and study Genesis chapter eleven so you can fill in the names for each box and their ages at death. This gives you a picture of the ages of Noah and Shem's descendants in Genesis Chapter 11. It may surprise you to learn who was alive during Abram's time as well as some other interesting facts.

Study your completed worksheet on Genesis Chapter 11 to answer the following questions.

2. Was Noah alive during Abrams lifetime? If so, how old was Abram when Noah died?

3. Which 3 fathers outlived their sons?

4. Which father outlived the most descendants?

5. Who was the leader of the people who settled in Shinar? From which of the three sons of Noah did he descend?

6. What two advantages did the people hope to gain in building the tower?

7. Why were the people wrong to build the tower?

8. From reading Genesis Chapter 10, what 2 things did God cause to happen to those who were building the tower?

9. How were Shem and Terah similar as fathers but different than the other fathers listed in Genesis Chapter 11?

10. How were Nimrod and Cain similar?

11. Which human characters that we have studied in Genesis Chapter 11, and also from the first 10 chapters of Genesis have been:

13. After studying Genesis Chapter 11 and the 10 chapters before it, what have you learned that you can apply in your everyday life?