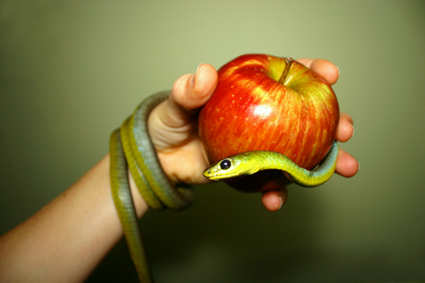 This webpage provides answers for the Genesis Bible study daily questions on chapter three. We pray that God will continue to bless you and provide you spiritual knowledge as you study His Holy Word.

1. Who is the serpent and what are the possible explanations for a talking snake?

Satan is the serpent (see Revelation 12:9 and 2:20) Some possible explanations: - Satan took possession of the serpent and spoke through it - It is a figure of speech.

2. Compare and provide comment on the extracts of scripture from Genesis Chapter three below. What was the lie, the temptation, and the trickery of each?

Prior to the fall they were as little children and had no knowledge of good and evil, whereas after the fall their actual knowledge of evil caused them to realize they were naked. Previously they had no idea it was wrong Now they hid from God whereas before they likely enjoyed great fellowship with Him. Now the first instance of fear is seen in mankind.

4. In verse eight of Genesis Chapter three, God is said to be walking in the garden. This is an example of personification where human traits are attributed to God. We know that God is Spirit (John 4:24).

From the following verses from Genesis chapters 1 and 2 list the specific human traits attributed to God:

5. Analyze Adam’s answer to God’s questions "Who told you that you were naked? Have you eaten from the tree that I commanded you not to eat from?"

6. If you could sum up the fall of man in one word, what would the word be?

7. What does enmity mean? Describe what this first prophecy found in the Bible, spoken by God Himself, is predicting.

According to Webster - Enmity means positive, active, and typically mutual hatred or ill will

The woman’s seed is mankind

9. List the consequences for all women for Eve’s sin from verse 16 of Genesis Chapter three.

10. List the consequences resulting from Adam’s sin from verses 17-24 of Genesis Chapter three. Which is the most serious?

God tells him in verse 19 that “… for dust you are and to dust you will return."

He enjoyed a spiritual relationship with God prior to the sin and now was prevented from fully enjoying that or the benefits of eternal life.

Here are some references on this:

Rom 5:12-21
12 Therefore, just as sin entered the world through one man, and death through sin, and in this way death came to all men, because all sinned- 13 for before the law was given, sin was in the world. But sin is not taken into account when there is no law. 14 Nevertheless, death reigned from the time of Adam to the time of Moses, even over those who did not sin by breaking a command, as did Adam, who was a pattern of the one to come.

18 Consequently, just as the result of one trespass was condemnation for all men, so also the result of one act of righteousness was justification that brings life for all men. 19 For just as through the disobedience of the one man the many were made sinners, so also through the obedience of the one man the many will be made righteous.

20 The law was added so that the trespass might increase. But where sin increased, grace increased all the more, 21 so that, just as sin reigned in death, so also grace might reign through righteousness to bring eternal life through Jesus Christ our Lord.

Rom 5:17
For if, by the trespass of the one man, death reigned through that one man, how much more will those who receive God's abundant provision of grace and of the gift of righteousness reign in life through the one man, Jesus Christ.

I Cor 15:44-49
If there is a natural body, there is also a spiritual body. 45 So it is written: "The first man Adam became a living being"; the last Adam, a life-giving spirit. 46 The spiritual did not come first, but the natural, and after that the spiritual. 47 The first man was of the dust of the earth, the second man from heaven. 48 As was the earthly man, so are those who are of the earth; and as is the man from heaven, so also are those who are of heaven. 49 And just as we have borne the likeness of the earthly man, so shall we bear the likeness of the man from heaven.

I Cor 15:21-22
21 For since death came through a man, the resurrection of the dead comes also through a man. 22 For as in Adam all die, so in Christ all will be made alive.

12. Did Adam and Eve realize they were committing a sin by eating from the tree of knowledge of good and evil? Why was it wrong if they did not yet understand the difference between good and evil?

It was wrong because they disobeyed God despite the fact that God told them that they would die as a result of disobedience.

They might not have fully understood what death was but nevertheless, they disobeyed and died spiritually.

The most important aspect of the Garden of Eden was the relationship, not the physical aspects.