In his commentary on Proverbs Chapter 30, Derek Kidner observes Agur's profound humility that's seen in the first nine verses.  He then offers that Agur's humility is "expressed by his detestation of arrogance in all it's forms and by his fascinated, candid observation of the world an its ways."

Kidner regards Agur as a man of faith, an artist, and an observer of character whose insightful and delightful proverbs offer us a unique view of our world.

There are at least three lessons from Proverbs Chapter 30.  The first ten verses will provide one lesson, verses 11 through 16 another lesson, and verses 17 through 33 at least one more if not many more.  We will prepare and post the lessons as soon as possible.

The Book of Proverbs chapter 30, verses 11 through 16, deals with the sin of greed of “those” people.  This English rendering is translated from the Hebrew word dor; which is also translated generation but in this sense is a “group” or “class” of people.

This class of classless people existed at the time of Solomon and they're still with us today.   My prayer is that we will be sensitive to the sin of greed in our own lives and instead honor our Creator.

11 There is a generation that curses its father and does not bless its mother.

12 There is a generation that is pure in its own eyes, yet is not washed from its filth.

13 There is a generation—how haughty its eyes and pretentious its looks.

14 There is a generation whose teeth are swords, whose fangs are knives, devouring the oppressed from the land and the needy from among mankind.

15 The leech has two daughters: “Give, Give!” Three things are never satisfied; four never say, “Enough!”:

16 Sheol; a childless womb; earth, which is never satisfied with water; and fire, which never says, “Enough!”

The writer of Proverbs Chapter 30 describes this sinful class of people in verses 11 through 16 as an ungodly people.  For example, “those” people are a group of people who are:

The Pot Curses the Potter

God’s fifth commandment was to “Honor your father and your mother, that your days may be long in the land that the Lord your God is giving you” (Exodus 20:12).  But this class of people were so wicked that they cursed their fathers and didn’t bless their mothers (verse 11).

Not to bless the mother is an understatement in which an affirmative is expressed by the negative of the contrary which in this case is equivalent to “to curse” as opposed to bless.  This sin of greed doesn’t just violate the commandment to honor and obey parents; cursing parents was a capital crime under the Law of Moses (Exodus 21:17).

One commentator notes that these people are “foolish rebels who do not bless those to whom they owe their very lives, instead, they demean and defame them to obtain their inheritance faster and to relieve themselves of their responsibility to care for them."

Moreover, they viewed themselves as righteous (Proverb Chapter 30 verses 12-13) despite their sin.  They had a high but inaccurate opinion of themselves, considered themselves better than others, and even held others in contempt.  Yet they’re unclean hypocrites with unwise, greedy, and arrogant attitudes.

It’s as though the dirty clay pot curses the potter who made him and then pretends it’s something beautiful.  Don’t we do the same when we disobey God – our Creator - when we don’t acknowledge our sins?  Let’s remember who created us and obey His Word – especially His commandment to honor our parents – and repent of our sins.

A Class of Bullies 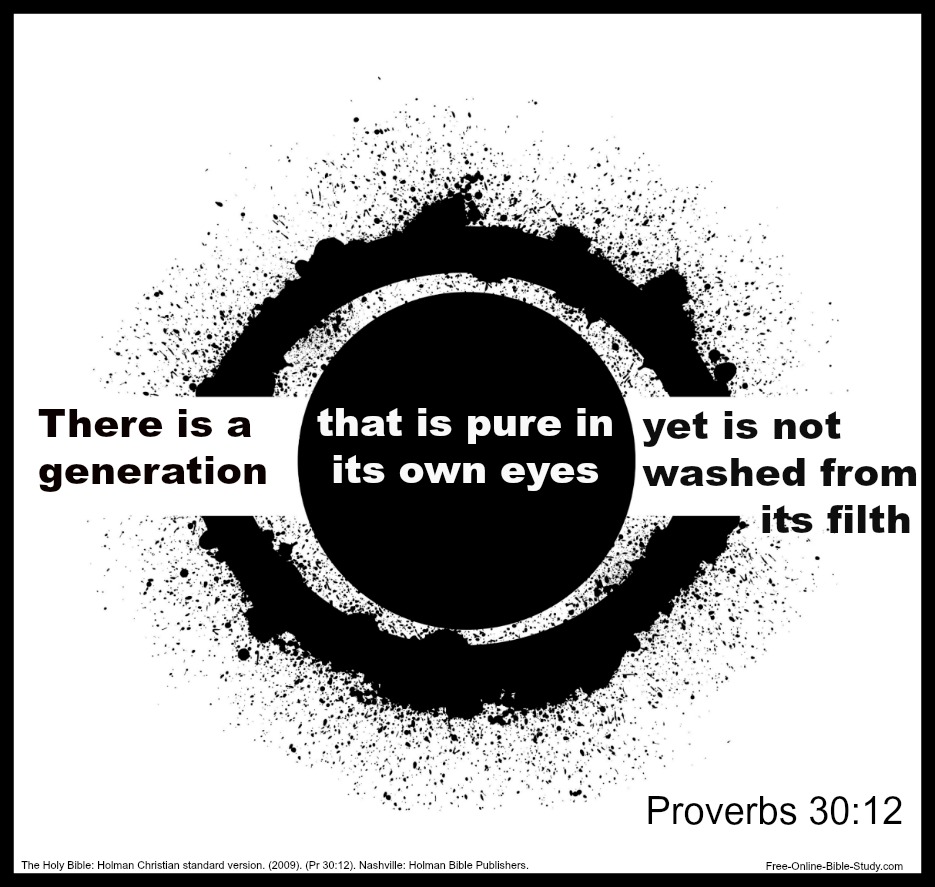 Those classless people not only disobeyed the fifth commandment because they abused their parents (verse 11); they also devoured the poor and needy (verse 14).  They did this by their speech as represented by metaphorical usage of swords and knives along the verb devour.  The metaphor signifies the satisfaction of their greed by robbing the needy poor and/or withholding from them what is their due.

One commentator speculates that this robbery may have occurred in the courts by the provision of false testimony.  This would then lead to the confiscation of property or withholding of proper wages.  Both of these would lead to a loss of the means to support themselves and face premature deaths.

Those people who lied to steal disobeyed two of God’s commandments (Exodus 20:15-16); and because they also coveted, broke a third commandment (Exodus 20:17).  As if that isn’t bad enough, these bullies stole from the poor and needy (Proverbs Chapter 30 verse 14).

How about you?  Have you bullied someone by defrauding him or withholding what’s due him to satisfy your own greed?  Are you dishonoring your parents?  If you are, I pray that you will repent and change your ways.

Those people who disobey God by dishonoring their parents and stealing from the poor and needy are motivated by greed.  It’s pretty bad that they can’t see their sinful nature and that they’re acting like Satan who steals, kills, and destroys (John 10:10).  Stealing, lying, and greed are all motivated by a love of self.  When we love ourselves we will never be satisfied because of our sinful nature.

One commentator states that “ . . .these four insatiables, which represent life and death, are engaged in an unending battle as long as the earth endures.  Until God separates the wheat from the chaff greedy tyrants never say, ‘Enough!’” and the righteous ever strives to produce life.”

Finally, the leech demonstrates that greed only begets greed.  It's never satisfied and so also is the man with only self-serving interests.

Conversely, the man who is focused on serving the Lord and others will always be satisfied.  Jesus Christ is our example, not the greedy classless people of Proverbs 30.  Classless people have always existed - from the time of Solomon and still to this day.  We need to honor our parents, and not bully people for our own selfless gain.  If we have done these terrible things then we need to repent, confess our sins, and correct ourselves.

In summary, we need to guard ourselves from the self-serving sin of greed in our lives and instead, live our lives in selfless service to God our Creator.  Otherwise, we will never be satisfied and neither will God.

We pray this Proverbs Bible Chapter 30 Bible Study has blessed you.

Check back later because we will post more lessons from Proverbs Chapter 30.

In Addition to the References Listed on the Main Page, the Following References Were also Used In the Development of This Study of Proverbs Chapter 30: