This study of Genesis Chapter 6 is the sixth of eleven in a series of studies of the first 11 chapters of the first book of the Bible. Learn why God God's heart was filled with pain and about Noah who was righteous, blameless among his contemporaries and walked with God.

Your learning comes from reading and studying the Bible. After you have read the passage below, answer the following questions. It's a good idea to do them every day.

But Noah found favor in the eyes of the LORD. . . Noah was a righteous man, blameless among the people of his time, and he walked with God.

1. The first four verses of Genesis Chapter 6 have been interpreted many ways for thousands of years. The controversy stems from the interpretation of the words “sons of God”, “daughters of men” and “The Nephilim”. Let’s take a brief look at these terms.  Two of the more prominent interpretations of the term “sons of God” that have been given mean they are angels and men of the line of Seth.

2. In the context of this passage from the first four verses of Genesis Chapter 6 and the passages before it, who do you think the daughters of men were?

[There were giants in the earth] napiliym (OT:5303), from naaphal (OT:5307), "he fell." Those who had apostatized or fallen from the true religion. The Septuagint translate the original word by gigantes, which literally signifies earth-born, and which we, following them, term giants, without having any reference to the meaning of the word, which we generally conceive to signify persons of enormous stature.from Adam Clarke's Commentary

But although the idea of gigantic power does underlie the language of the sacred historian, the term Nephilim seems to bear a deeper significance; and if etymology may guide us, it describes a class of men of worthless and at the same time of violent character. It is commonly traced to naapal (OT:5307), to fall, and considered to signify either fallen ones, apostates, or falling upon others. from Jamieson, Fausset, and Brown Commentary

Why would this interpretation make sense?

4. List 2 examples of mankind’s evil that caused God to be upset as provided in Genesis Chapter 6.

5. It seems that the two areas of sin that were prevalent in the days before the flood were sex (i.e. a degradation of marriage) and violence. How do we see the same problems in the world today? Give some examples. What does this say about mankind?

6.  It is interesting to note that the online encyclopedia Winkpedia provides the information below in an article under the title: “super centenarian” – a term used for someone who has reached the age of 110 years or more. The article states “. . . this is something achieved by only one in a thousand centenarians, and only about one super centenarian in 44 lives to turn 115.” The article also provides information on claims of extreme age as provided below:

“While claims of extreme age have persisted from the earliest times in history, the earliest super centenarian accepted by Guinness World Records is Thomas Peters, who was born in Groningen, Netherlands, April 6, 1745, and died there March 26, 1857 at almost 112 years of … However, scholars such as Jean-Marie Robine consider Geert Adriaans Boomgaard of the Netherlands as well (1788-1899) to be the first verifiable case, as the alleged evidence for Peters has been "lost." The earliest super centenarian to reach the age of 113 is Delina Filkins, who was born in Herkimer County, New York,  May 4, 1815, and died there December 4, 1928.

Over eight hundred super centenarians have been documented in history, and this is doubtless a fraction of the number who have really lived, but the majority of claims to this age do not have sufficient documentary support to be validated. This is slowly changing as those born after birth registration was standardized in more countries and parts of countries attain super centenarian age.

The longest documented lifespan is the 122 years 164 days of Jeanne Calment (1875–1997). While her stories of meeting Vincent Van Gogh or attending the 1885 funeral of Victor Hugo might have been embellished, her life was documented in the records of her native city of Arles, France, beyond reasonable doubt.

The Guinness Book of World Records accepted in 1978 the claim that Shigechiyo Izumi was born June 29, 1865, and from the 1980 edition considered him the oldest person. He died February 21, 1986 (the 111th birthday of Jeanne Calment). However, subsequent research by some Japanese scholars has cast doubt on his claim, as his birth certificate is believed to refer to that of his older brother who died young and whose name might have been reused as a necronym.”

In verse 3 of Genesis Chapter 6, God states… "My Spirit will not contend with man forever, for he is mortal; his days will be a hundred and twenty years." This could mean that God waited 120 years before sending the flood or it could mean mankind would only live 120 years or so. How old were the following people who lived after the flood according to the Bible? 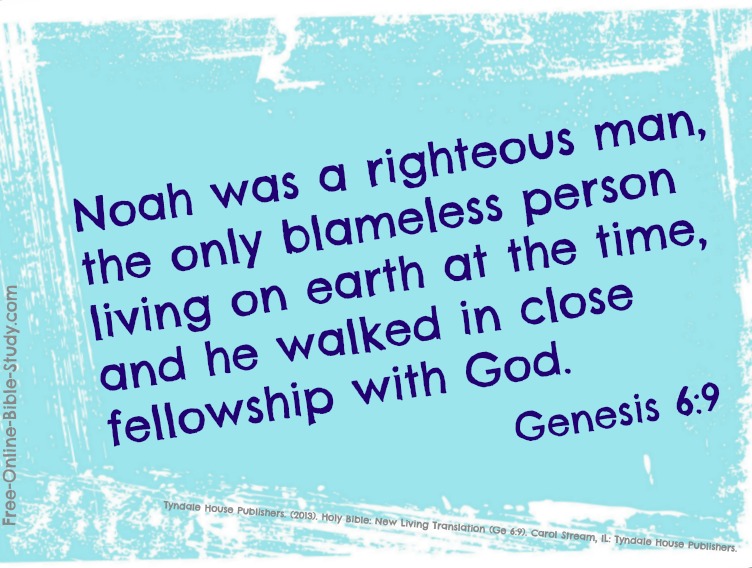 7. We learn from verse 9 of Genesis Chapter 6 that Noah was a “…righteous man, blameless among the people of his time, and he walked with God.”

Who was the person who most likely influenced Noah in his walk with God?  What does Hebrews 11:7 tell us about Noah’s frame of mind when God told him to build the ark?

8. For what reasons might the revelation of God to Noah have seemed unbelievable to Noah, his wife and children?

9. Consider that the Bible tells us Noah was a man of the soil (see Genesis Chapter 9, verse 20). Also consider the size of the ark Noah was to build (450 feet long, 75 feet wide and 45 feet high). What does this say about Noah’s faith?

10. What do you think helped to convince Noah’s family of the truth of God’s revelation to him:

11. There are three famous arks in the Bible. Noah built the first and put animals in it. What was placed in the other two and how are they related to each other?

12. How long do you think it took Noah and his family to build the ark? List all the things God commanded Noah to do in Genesis Chapter 6.

13. What would confirm your belief in the story of the flood the most? Would it be:

We pray that his study of Genesis Chapter 6 has blessed you and encourage you to continue to study the Bible.